“I studied fine art and I know sculpture, I know make up, I know design. I worked 18 years in make up; in cinema and theater, television. Some of this hair I buy it from the hairpiece shopping and some of it I cut it from my grandmother and mother-in-law. I think that hair has a special character. If you wake up and have a bad feeling you look at yourself in the mirror – you think – “Oh shit, my hair.” When you are a good man or a good woman, or an aggressive man or an aggressive woman, kind etc. your hair becomes like you. I can’t use human skin or human eyes for painting but I can use hair.” 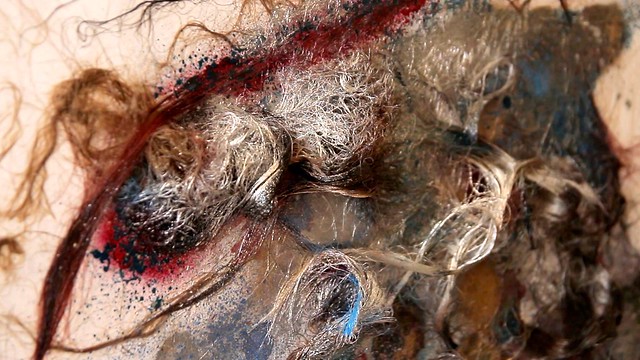 I use gold and silver for modern war. I want to show modern war and modern damage and modern psychological trauma but you can’t talk about these things with red, with yellow. They have traditional meanings, red, yellow and black. 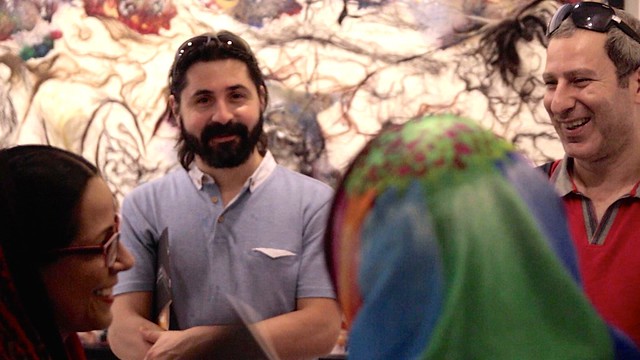 My exhibition is not about the war in Iran or for Iran. It is about anyone in the world because we are all humans. Why do we do war? Why? For what? For money? For country? For earth? For oil? Why?

This is like a mother. “The Mother” is not a man or a woman, I don’t know, just human. And he or she wants to care for his or her baby. But this human is in another bigger human. Its a form, in form, in form.

I want to show my imagination about the starting of the war. When humans catch horses and put horseshoes on them, it starts big wars. I know, horses are very kind animals but we change the original character. The first war machine was a horse. 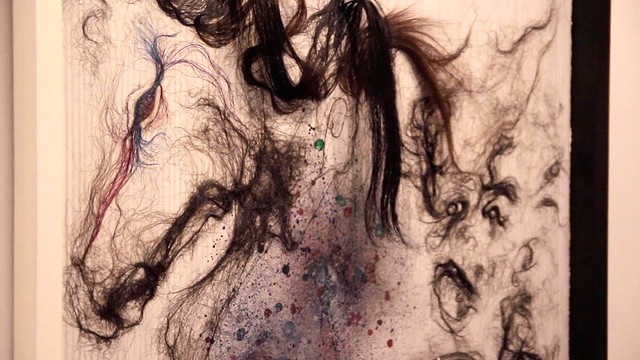 The crisis means, I think it is simple, everything – when you talk about the war – or we see the war, our mind is going to be in a crisis. Its not about the people in the war. It is about now about me, about you, about any people thinking humanity. Many people can’t think about anything, because all the time they are working, sleeping, sex, food, baby. When they see art they can think. Its very important. If anybody is thinking about meaning about life, maybe the world will change. Maybe. I don’t know. 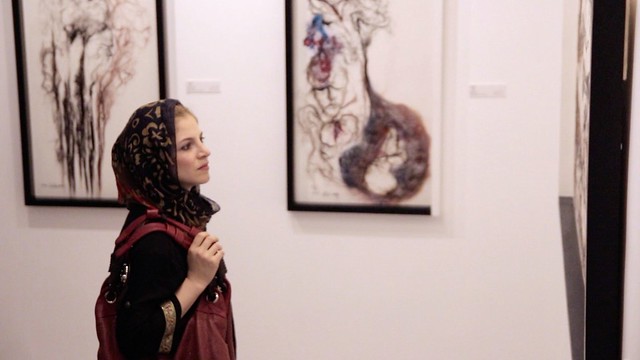