God made man from dust. That’s why this Muslim man loves mud.

After years of working in Paris, the artist Emsophian Benjametha (เอ็มโซเฟียน เบญจเมธา) moved back home. He’s originally from the countryside, in the southern-most part of Thailand where the large majority of Thais are Muslims – not Buddhists. There, he crafts art out of mud.

“My name is Emsophian Benjametha. This is my ceramic workshop and goat farm. When I was a young boy, my father used bricks from local factories.”

The soil in Pattani Provence, where Em grew up, lends itself to brick making. It’s not a dainty clay, like mud from northern Thailand near Chiang Mai. Instead, the clay in Pattani bubbles up and breaks the surface when it dries. It’s slightly rough to the touch and has an off-white color. But that doesn’t make Pattani’s clay any less valuable. In fact, appearances can be deceitful – like Em’s ‘ugly’ teapot.

“The black teapot is angular and twisted. Most people think it’s unattractive. But there’s beauty inside, because when you drink tea with friends, the teapot fosters the relationship. So the teapot proves that what’s inside is more important than the outside.”

Like almost all of his neighbors, Em is a devoted Muslim. He wears a long, now-greying beard, as the Prophet Muhammad is believed to have had. After the teapot, we come to a ceramic piece that resembles a vase. The neck is however too thin, to be able to set flowers in. Em tells me, it’s a jar, just for decoration. Looking closer, I notice that there are jagged, uneven lines on the ceramic of the jar. These fissures are dark at the base, but turn golden as they stretch up towards the neck. 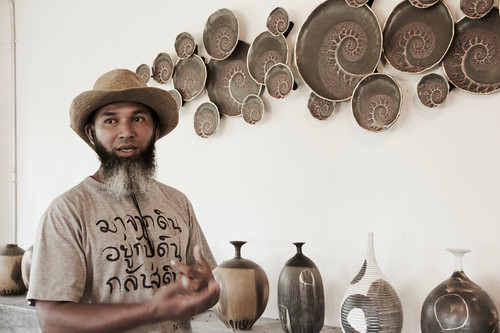 “The cracked jar represents a verse in the Quran,” Em tells me. 17:81 reads وَقُلْ جَاء الْحَقُّ وَزَهَقَ الْبَاطِلُ إِنَّ الْبَاطِلَ كَانَ زَهُوقًا which translates into English as ‘The truth has now come and falsehood has vanished’. I ask Em, “If the teapot teaches that you can’t judge a person from the outside, you mean that the cracks in the jar reveal what lies below the surface?” Em simply smiles back and lets me think about it. 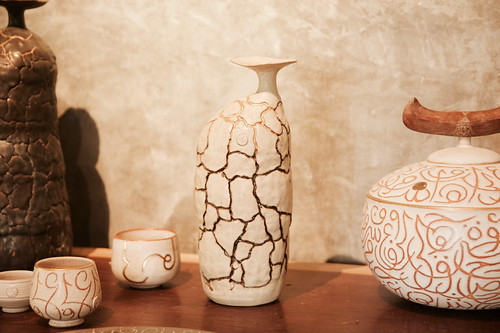 Then he shows me a large serving bowl which he calls “Nostalgia”. The wooden handle on the bowl’s lid takes the form of a mini banana with the ends pointing up. It resembles a Kolae, Pattani’s traditional fishing boat or maybe a crescent moon, a symbol of Islam.

It’s obvious that Em’s Pattani home is a spring of inspiration – from the local mud he crafts his art with, to his childhood memories which flow into his design to even his Muslim faith. “My motto is ‘From Clay, With Clay To Clay’. God created man from the soil. We are sustained from the earth, and some day we will die and return to the soil.”